Pirates of the Caribbean : At Wit's End

Things I Know and/or Understand:

Things I Do Not Know and/nor Understand:

So Saturday night, GramTuna and I lose our collective minds and tell TeenTuna that yes, we will all go and see Pirates at 8:45 pm, even though this particular piece of cinematic wonderment wouldn't end until midnight. We got there early, which is usual for us, because pickiness abounds in regards to where we sit (top row, center). We grabbed our seats, grabbed our popcorn and pop and watched the theater get fuller and fuller and fuller. This amazed me because the movie has been out since May, and now that theaters saturate the market for the first several weeks of a film's opening, I figured it was going to be us and the crickets. Nope. we were crammed in there, stem to stern, with no wiggle room at all.

Now, TeenTuna is up to date on the whole Jack Sparrow Pirate saga. She watched the first movie eleventy-billion times over vacation, and watched the second one Saturday afternoon. I, on the other hand, have managed to half-watch/ignore and/or sleep through the first one eleventy-billion times and I saw the second one once. At work. While I was working. So my level of dedicated concentration to this particular saga? Not so much.

But after watching the second movie -- especially the last 45 seconds or so, which was the obviously cliff-hanger -- TeenTuna practically drooled and said, "Now I HAVE to see the NEXT ONE!"

So we went and watched. Or tried to watch. Without giving away any sort of plot, lets just say two things happen in this movie. First of all, there is talking. A LOT of talking. And I have to ask, why? It's not for the greater good of character development, because you're either a Pirate Guy, a British Guy or a Fish Guy, and that's it. But they talked and talked and talked (especially the British Guys, which I have to think is so they can justify their uniform), and every single time they spiraled down into another 20 exposition on something or other, I grabbed the opportunity to take a little snooze. Which I did. A lot. 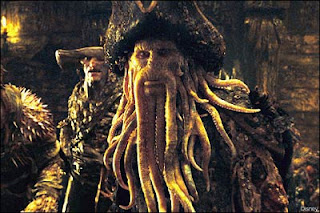 Fish Guy
The other thing that happens in this movie is fighting. Oh, there is lots and lots and lots and lots of fighting. If they weren't talking, they were fighting, and sometimes they were fighting and talking at the same time. It occurred to me that all these guys -- Pirate, British and Fish -- were collectively the worst shots in the entire world, because no matter how many times they blew up boats or sent cannons flying across the screen or thrust swords through their enemy's innards, somehow they never seemed to get the job done, because 20 minutes later (after the talking) they'd all be reassembled to go at it one more time. And with a film that drags on for nearly 3 hours, that's one hell of a lot of fighting and missing. And talking. And fighting and missing and talking some more. With a little more fighting and missing thrown in for good measure.

When it was FINALLY OVER, TeenTuna proclaimed it was great. I took one look at GramTuna with that sort of what the hell exactly was THAT kind of look, and we both burst in hysterics. Every time we tried to talk about the movie, we just started laughing harder, and TeenTuna got disgusted with the both of us and told us to stop embarrassing her.

Reviews I've read said the movie was about 20 minutes too long. I'd have to agree with that, about four times over. If the movie was cut in half, the only thing you would have missed was some quality napping time. And I tried SO HARD not to look at a watch. I kept urging myself to wait a little longer. It's the same deal as attempting to postpone the inevitable trip to the bathroom when you're out drinking. Once you break down and do it, no matter how hard you try, it's every 15 minutes until you leave. 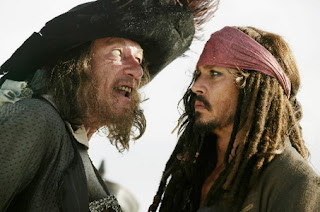 Pirate Guys
So while I was awake, I watched and fidgeted and checked the time. Aside from talking and fighting, I can't spoil the story in the slightest, because none of it made a damn bit of sense. Just know there was Pirate Guys, British Guys and Fish Guys. They talked some, they fought a lot and they blew up stuff. At the end, some Pirate Guy mentioned maps to Fountain of Youth and as the Piratey music started up and the credits started to roll, TeenTuna said, "Now they HAVE to make ANOTHER ONE!"