Get the snickering out of the way now. I'm back in Tap Class.

It was a combination of "hey, it's good exercise" coupled with "this is what happens when you're all happy and in a good mood" coupled with "the teacher is a good friend of mine and wouldn't it be nice to support him in his brand new studio" coupled with "any exercise is better than suffering through another day of Beelzebub's Handmaiden Denise Austin and her scary bug eyes and hoarse whispery voice saying "THAT'S RIGHT! YOU'RE GETTING STRONG! STRONG THROUGH THE POWER OF YOGA! I'M SO PROUD OF YOU!!" that made me do it.

TinyTuna, who has been taking tap for seven jillion years was thrilled because now she was better at something than I was and took no time in Lording that over me. Do you know this one? This one? How about this one? Tappity-tap-tap-zoom-zoom-tippity-tap across the room. What you can't do that? Really? Why not? That one is EEEEAAAASY.

I was keeping my tap class news under wraps because frankly, I didn't really want to hear all the crap I was sure to get from others. That worked just fine until TinyTuna, unable to keep her yap shut, let fly during Sunday Brunch at the Grill Dogs. As we were catching up from the past week PeaceTuna asked a general "So what's new?" kind of question, and wouldn't you know it, the first thing out of TinyTuna's mouth was a big, fat MOM'S TAKING TAP DANCING LESSONS!

This was followed by a big bug-eyed TinyTuna look that unmistakenly read, "HA HA!! We're in public and I'm SAFE!"

I shot a look at her. And then I looked at Scout, sitting next to me. He was smiling very hard in his usual nice, polite, pleasant manner. And I was quite pleased. Good Scout. Good, wonderful, supportive Scout. But then I realized, he wasn't smiling to be pleasant. His lips were glued together in a smile so as to not bust out laughing.

There they were, the two of them. TinyTuna and Scout. Napoleon and Judas. I didn't know which betrayer I should slay first with my glare o' death. Since you technically cannot kill your kids, I turned to Scout, who by all accounts, should have known better and should, in theory, be practicing his it's important to be a good role model in front of the child skills.

"Go ahead," I said. "Laugh all you want. Get it out now. And while you're at it, I used to swim Synchronized Swimming in High School, so that should give you plenty of ammo, funny boy."

He knew he was in trouble and wisely started backpedalling immediately. TinyTuna, on the other hand, was LOVING this no end, and kept saying oh-so-not sincerely or apologetically in the slightest, "I have a BIG MOUTH."

But anyway, I'm back, and not only am I back in tap class, I'm in intermediate tap class ... so, get out of here with my old bad self. My class is hysterical, with women ranging in ages from mid 20's to late 60's. We dance and wisecrack something fierce, which makes the overwhelming feelings of ineptness tolerable. I have taken to nicknaming everything, particularly dance steps, because I can't be bothered with their real names. Last week (WEEK ONE, PEOPLE) We were supposed to do a particular combination which was comprised of about 89 different parts. It was something like: jump, toe, brush, heel, step, shuffle ball-change, do not pass go, Buffalo Ladies do not collect $200, flap ball-change, pivot turn, jazz hands but I can't be entirely sure I didn't miss a couple of things in there. Anyway, after showing us this step (SLOWER! SLOWER!! GAH CAN'T WE GO SLOWER???) I finally yelled, "What is this called again? The HOOVER?" The Instructor (oh let's call him TippityTapTuna) looked at me and said, "What??? Hoover?"

So yeah, I'm back at it. And laugh all you want, but today was better than last week, and I actually remembered a few things, and started to get the soft-shoe and the time step down. You know that one ... it's just a jump to the left. And then a jump to the right. 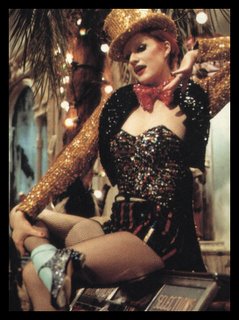 And aside from the fact that you can't do yoga in sequins and top hat,
I've decided that anything
anything
is better than downward facing dog.

OMG! Tuna, that is GREAT! I agree, anything is better than Downward Dog! And Denise? That girl makes me sick! I can't listen to her happy bubbly crud! UGH! I like to work out to Tony Horton, first because he cute, and second because he is goofy. Makes it go by fast. I also enjoy Chalene Johnson. She is bubbly, but funny and funky, so not too bad!

I love, love, love that you are tap dancing. What a great, fun workout! How many times a week do you do it? Sounds like a blast!

army in training
practice! drill! then practice more!
Tap will rule the Earth!

All I remember from my Tappenballet class of third grade is shuffle-hop-step-salap-step and the Shuffle Off to Buffalo. I've been threatening to sign up for lessons though!

Every time I've needed a smile during this very busy week, I've clicked onto your journal, had a quick laugh at your subject line, skimmed a bit and been able to make it through the rest of my day. Bless you!

Every time I've needed a smile during this very busy week, I've clicked onto your journal, had a quick laugh at your subject line, skimmed a bit and been able to make it through the rest of my day. Bless you!