Since the temperature has finally climbed above only-fit-for-a-Yeti-cold, I've been wandering outside checking for nubbins. I love nubbins. They can be the itsiest of bitsiest barely poking out of the ground nubbins, but the discovery of these little guys is so important to my psyche, they might as well come with a garish neon sign that says YOU MADE IT, BABY!

I'm pleased to say, the nubbins are back.

The garden so far is still a winter wreck. It's muddy, leafy and generally bleaugh, but dammit, there are nubbins here, there, and everywhere, which means all is good.

Along the driveway, some of them are a bit larger than the rest. These are actually January nubbins, otherwise known as those silly flowers that thought the 3-day winter thaw meant spring was here and it was time to wake up and start growing again. If only. If only.

But January nubbins don't know good from bad, and once they've committed to growing, they can't smoosh themselves back into the bulb, hit snooze and wait for the alarm to go off thirty sixty ninety-nine days later. So they just stop where they are and wait. Sure, their little green nubbiny heads get snowed on and they freeze up, but amazingly, they're OK. They just bide their time and wait until it's safe to come out-come out wherever they are and start growing again. Their early growth might be a little worse for wear due to perils of snow and ice and shovels and snowblowers, but I'm telling you, January nubbins are troopers. When they feel warmth, they start to grow. But if it's not the right time, they don't defiantly keep growing anyway. They don't give up, and they don't wither away and die. They're wise enough to stop and wait for the right time. And when they feel the warmth yet again -- one, two, three, even four months later -- they simply start again.

On the outside the garden is still gray and shmucky, But packed inside every little nubbin is a lesson of timing, patience, strength, resilience, hope, promise, renewal and life. Like the nubbins, I'm glad to have made it through the winter. Lately it's seemed like I've been frozen, not ready, willing or able to move. But looking back over the past few months I'm glad I was strong enough to hold on, because holding on was all that was necessary. And now, it's feeling warm again. I think it's time to grow. 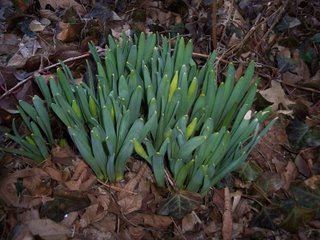 Posted by GreenTuna at 7:47 PM