I often wonder what might have been going through her mind, and by "her" I mean Mary, the leading lady of the Christmas story.

The only real monologue we get from Mary is right after the Annunciation (which, of course, was plenty reason enough), but even with that lovely paragraph of text, it ends rather abruptly with the somewhat mysterious sentence "and she pondered all these things in her heart." After that episode, we hear very little about what Mary thought. And that, I think, is too bad.

I have to imagine that she would have had plenty to say about being VERY pregnant and having to travel all over Bethlehem's half acre due to governmental bureaucracy. Heck, I whine for days on end when I can't put off my half-hour appointment with Turbo Tax any longer. And to have to do it on a donkey? Pregnant or not, it would not be my preference...ever. But we never really hear what she thought about it. Was she still magnifying the Lord? Was she still feeling blessed? Or as she rode mile after uncomfortable mile, was she wondering, "Oh my Lord....what NEXT?"

She didn't know at the time that the next part of the story was giving birth out back with the animals. She didn't know her baby would be laid in a bed of straw. If she knew what was coming next, she might have told Joseph, "turn that damn donkey around and take me home." Maybe she said it anyway. Maybe not. But even if she didn't, I have to believe that she didn't sit there empty-minded gazing at the scenery. I think her mind would have been churning with that somewhat worried, persistantly nagging question, "what next?"

"What next?" ended up being an unexpected visit by shepherds. Classical artists depict this scene in a very peaceful, pastoral and holy setting. Sacred light shines from within the manager. Animals stand in quiet reverence, and shepherds kneel nearby in quiet adoration. But if you think about it realistically, you just HAVE to ask. Really? Do you think so? I bet shepherds who have been out working for hours in the fields tend to....smell like shepherds who have been out working for hours in the fields. So these stinky strangers just show up unannounced and start talking about angels and a star and then they kneel in front of her baby. Did Mary just sit by and blithely smile? I hope not. I hope she asked who on earth these people were and why they decided to show up. I hope she wondered both incredulously and nervously, "what next?"

Can you imagine if she would have known? Because next was kings and camels and carols written in 6/8 time. What next were gifts not found on your basic Bethlehem registry. And after that came dreams and warnings of danger, and moving the family to safety time and time again. This was not a typical "day in the life" by any stretch of the imagination.

And that, in a word, was Mary. 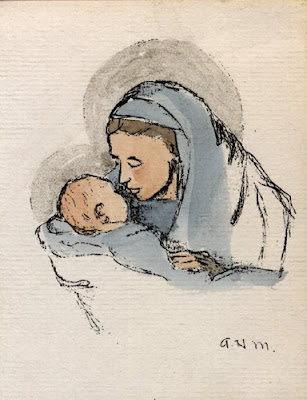