Fit as a Fiddle

Today (Thanksgiving Day Number Two) we ate ourselves into near comas and then dispersed around the house.  TeenTuna and NephewTuna adjourned and decided to play some Wii Fit.

Computer games -- especially first-player games -- are a funny thing.  Of course there is a bit of a learning curve as you figure out how to move, carry an object, or complete a task.  In other words, it's not that you don't know how to run.  You simply have to learn how to run the way the game wants you to run. 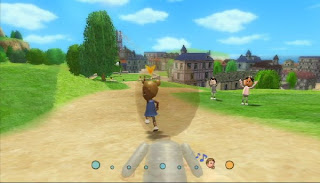 NephewTuna decided he wanted to try the jogging portion of the WiiFit.  The skill required here is elementary:  Holding the remote control in your hand or putting it in your pocket, simply jog in place.  The vibrations registered in the remote signals how fast or slow you're moving, and the little shadowy cartoon figure (that's you) will jog along the trail.  Seems simple, right?

Ten year-old boys being what they are (squirrely and apt to ignore rules), never do anything the simple way.  First, NephewTuna figured out he could just shake the remote in his hand and his figure would jog.  The committee of the rest of us told him no, he had to actually jog in place which, sadly for him, required the movement of feet.  He asked about "the purple guy" who was always in front of him.  We explained that the purple guy was like a "pace car" and he shouldn't pass him.

"But what happens if I do?"
"If you run too fast, you fall."
And sure enough, his character did a total face plant on the jogging trail.

Now, you might think that post-face plant, it would be suffice as cautionary tale.
Instead all three of us laughed hysterically and yelled, "Do it again!"
And he did.  And we laughed. And he did again.  And we laughed harder. 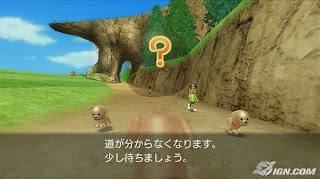 A little later down the course, as he was jogging (currently in the upright position) several cartoon dogs jog past in the other direction.  "PIG!" exclaimed my nephew.
"What?!??" I laughed.  It's not a pig.  It's a DOG."
"Pig...dog....whatever.  It looks like a pig."
As the DOGS got closer I explained, "it's not a Pig.  It's a Dog.  It's got long ears."
And sure enough, I seemed to have won that squirmish.

Not long after he jogged by some DOGS again.  Deciding to end a repeat performance of the great pig debate before it even begun, I said, "They aren't PIGS, they're dogs.  See their colorful colorful collars?"

Without skipping a beat, he said simply,  "that's to tell them apart."
And with that irrefutable piece of information hurled at me, all I could do is wish him luck and find that piece of Pumpkin Cheesecake that had my name on it.