Can I tell you how insanely happy I am that my only child is no longer a child?

Sure, there are times when I'm just bummed that she is off having the college experience (which in her case involves class, homework, indentured servitude to the music building practice room, complaining about food, and taking the occasional trip to the football or hockey game), because the house is understandably quieter without her.

But oh, let me count the benefits.

Growing up, as she passed the many milestones of childhood, adolescence and the teenage years, I had a camera in one hand and a imaginary glass of champagne in the other.  Never once did I experience tear-stained nostalgia for loss of diapers or formula.  Like the Israelites freed from their bondage in Egypt, I celebrated the day we walk out of the nightmare daycare #1.  However, just as the Israelites were soon running for their lives from Pharoah and the boys, I quickly discovered the nightmare that was daycare #2 was exponentially worse than the first.  Daycare #3 was the answer to my prayers, and the day she entered Kindergarten, it was as if I had finally entered the land of milk and honey cookies.

Over the years there have been countless other celebrations of never again.  No more school pictures.  NO MORE HOMEWORK.  No more standardized tests.  No more tri-fold pamphlets, power point presentations or group projects that always seemed to involve way too many people and one video camera.  No more elementary school music class recorder presentations (one was MORE than enough).  No more dances, No more proms.  NO MORE PARENT TEACHER CONFERENCES THANK THE LORD AND SAVIOR.  They were all important (or perceived to be important) at the time, but over the last several months I have found myself taking a mental roll call of all the things that are absent this year.

To be fair, life after college isn't all skittles and beer.   Many activities I thought I had drunk into the "done" column managed to return, albeit in a different form.  Group projects continue to rear their ugly heads (but without me, so that's a plus), and the scourge that was parent-teacher conferences was quickly replaced by the scourge that was freshman parent/student orientation.  Somehow, I suppose in the end it all evens out.

But looking back on it all, sweeter than knowing certain tasks were forever done has been knowing that we managed to dodge the bullet on some fads altogether.  And nothing, NOTHING in this world makes me happier than knowing I never had to deal with 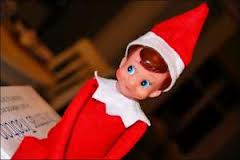 For the uninitiated, this is the dreaded "Elf on the Shelf" who is nothing more than a holiday snitch.  A tattletale.  An enforcer.  A narc.  By day this creepy crappy hunk of plastic is the ultimate voyeur, and by night, it's the elfish equivalent of TMZ crossed with the National Enquirer -- reporting all the scandalous activities to Santa.  The purpose of the Elf is to make the child behave during the holiday season, but my question is, where are the parents?  Why does behavior and manners suddenly fall under the jurisdiction of this sideways glancing stool pigeon that has a 31 day shelf life?  If there was ever an inanimate object that deserved "you're not the boss of me" hurled at it by an indignant preschooler, this is it.


Even if I -- God forbid -- still had a young child, there is no way I would ever cede this kind of power to a doll.  The day an adult isn't adult enough to actively parent a child -- day in and day out, for better or for worse -- is the day the parent has lost control in power struggle.  After all, if the elf has to do the dirty work to make a child behave, what recourse will a parent have when their toddler is now a teenager asking for the keys to the car?  Elf on the dashboard?

Thank you, no.  As far as I'm concerned, the Elf can go to shelf. 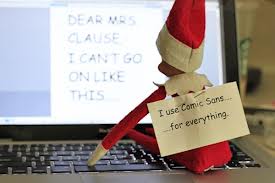 I made it through 5 children without ever having HEARD of an elf on a shelf!