The Power of Punctuation 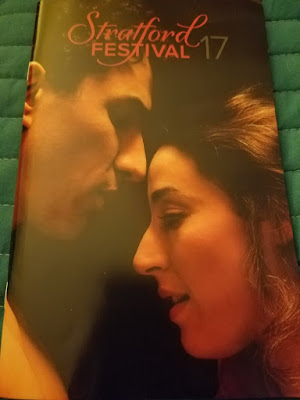 From my neighbors to the north.
This is huge!
I have no words!
Counting the days! 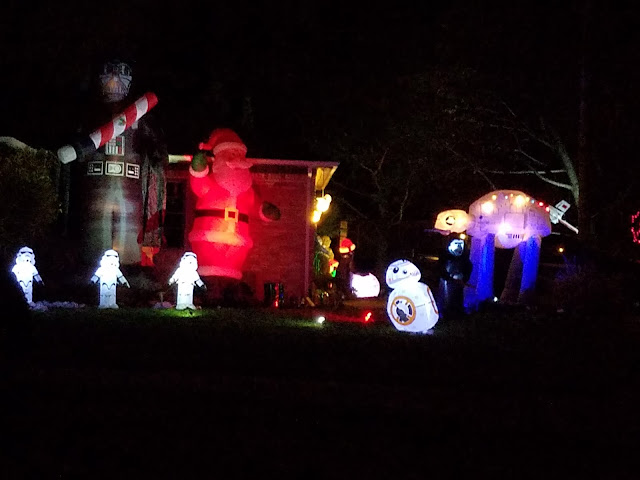 From my neighbors to the north.
This is huge.
I have no words.
Counting the days.
Posted by GreenTuna at 11:13 PM 2 comments:

The Nightmare Before Christmas. Opus 2

Twas a night in December, and all through the house
no musicians were present (can't speak for the mouse).
The dress blacks were gone, no cuff links were there.
You'd have thought we'd been chased out, then eaten by bears.

Other folk were nestled all snug in their beds,
While visions of sugar plums danced in their heads.
We had no concert kerchiefs. No symphonic caps.
Musicians know nothing 'bout long winter's naps.

For ever December our lives seemed to shatter,
It's always the same. The year doesn't matter.
In dreams, to each concert I flew like a flash,
and hoped I had music -- there was a large stash.

Each night a new program and music, and so
I hoped and I prayed they were pieces I'd know.
When, what to my wondering eyes should appear,
but a hundred new scores that all filled me with fear.

"Now high notes! Now low notes!
Now, difficult diction!
On codas!  Cadenzas!
Now sing with conviction!
To the top of the scale,
To the back of the hall!
Now sing louder, Sing louder,
Sing louder all!

As dry throats that before the wild holidays fly,
they wiped out our mid-range.   We started to cry.
so up to the drugstore our old Chevy flew,
with a handful of cash, and three-fourths of our crew.

And then, in a twinkling, I heard on the roof
the preening and boasting of basses who goof
As I channeled my dread and was turning around,
a million sopranos shrieked out, "Homeward Bound".

One was dressed all in fur, from her head to her foot,
and her clothes were expensive.  On credit cards put.
She had a poor flunky, a spine he did lack,
and paid for it dearly when notes he did crack.

Her eyes, they were wicked.  Her manners, not merry.
Her cheeks burned like lava, her nose in the air-y.
Her red lipsticked mouth was drawn up like a bow
that had want of an arrow for fierceness to show.
The heads of her foes she held tight in her teeth,
and the hairspray encircled her head like a wreath.
She had a thin face, and a much thinner belly,
or so you should say, lest she claim you were smelly.

She was bossy and mean, a right nasty old elf,
and I knew to steer clear, to protect my tired self.
A twitch of her eye, and a twist of her head
meant "shut up right now, or else you'll be dead."

She spoke not a word, but sang every work
and stole all the solos, like a really huge jerk.
Then, slaying an alto and several maestros,
she finally finished and struck quite a pose.

She bowed ninety times, and the crowd gave a whistle,
but no one could leave. There was not a dismissal.
But I heard her exclaim, 'ere she hogged the limelight,
"You all come back now for The Queen of the Night!"
Posted by GreenTuna at 10:31 PM 2 comments: 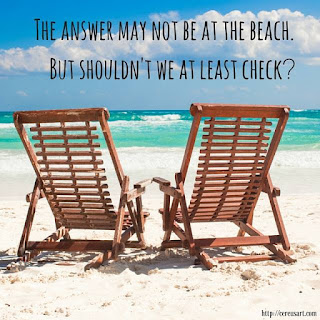 The beach seems to be a place where I can consider my life: past, present and future.  It invites me to sit, slow down and just be.  If I'm not ready, the ocean quietly yet insistently asks me to reconsider.  Again and again and again, with each breaking wave, it wears me down, convincing me to breathe in peace and breathe out the toxicity of everyday life.

Once in sync with my surroundings, I dig my feet into the sand and will my toes to be strong enough to root my body and soul to this tenuous spot.  But no matter how hard I try, I know my time at the beach is temporary, so it's important that I cherish every second in this special place.

With no distractions but sand and waves, I notice everything:  Dolphins playing in the ocean, ghost crabs scuttling on the shore, and seagulls gliding over the ever-shifting dividing line between land and sea, searching for that next snack.  I'm a stranger in their home, and yet they accept me without second thought. A lone kite flying over the dunes seems to say, "There's always room for one more."  I'm so grateful for that.

The power of the ocean lies just beneath the intoxicating beauty of the surface.  It takes very little to be reminded how how weak and insignificant we are.  The ocean teaches us to remain aware and never turn our backs to danger.  It reminds us that sometimes it's better to duck and let the fury pass over you.  Approach with caution, and respect your surroundings.

The answer may not be at the beach,
but peace, appreciation, acceptance, and respect are there.

I think we should go check.

For whatever we lose (like a you or a me)
It's always ourselves we find at the sea.
Posted by GreenTuna at 10:48 PM 2 comments:

Beyond the Ledger Lines

In two weeks, it will be graduation day.  And what a ride it's been.

It’s been four and a half years of everything college has to offer.  From dorms and cafeterias to apartments and roommates.   From late-night study sessions to Halloween craziness.  From tears and broken hearts to joys and wild successes.  You’ve seen it all, and come through on the other side, not just intact, but better.

Over these years you have grown, and you’ve learned how to navigate university red tape, apartment leases, and dealing with roommates, colleagues and professors.  Although there is no formal class, you have earned a great many credits in adulting.  And yes, although it’s not a real word, it is a way of living that, as unglamorous as it sometimes is, you do with more skill, less hesitation, and definitely less fear.  Be aware that this is a life-long course.  There will always be things you don’t know, but there are others who do.  Never be afraid to seek them out and ask.

Your graduation regalia includes the pink tassel, representing the academic discipline, music.  I know it’s not your favorite color, but wear it proudly.  It represents the hard work, fierce dedication, and well-deserved accomplishments you've gained in the field you love absolutely and unconditionally. Hold onto that love and remember how far you've come, because, as you well know, this isn't an easy road.

You will find yourself explaining your choices and defending your career path.  There will be inane professional questions: Why that dress? Why those shoes?  Why is your hair up instead of down?  Why is your hair down instead of up? Why that aria?  Why that teacher?  Why that school?   There will be dismissive questions along the lines of, "but WHAT can you do with a music degree?"  People will tease you and make little jokes and then say they're just kidding.  But those little jabs hurt, and quickly become tiresome.  Be prepared for punchline where you ask people if they'd like fries.  It's as unfunny as the trope those who can, do, and those who cannot, teach and the extraordinarily wearisome it's not over until the fat lady sings.  The temptation will be to counterattack, but don't bother.

Instead, live the life you know you are meant to live.  For many people, music is a hobby.  For you, music is an integral part of who you are.  Never apologize for that and never feel that this thing that brings you so much happiness is any less worthy of a degree than business or medicine or science.

We live in a world that is insistent on measuring things and calculating their worth.  We itemize, prioritize, and make action plans based on the bottom line of a ledger sheet.  Dollar signs are the universal language of the world, and money not only speaks, it also makes decisions for us.  But music doesn't work that way.  Yes, musicians like to make a living like everyone else, but it isn't the primary reason we are called to this field.  You've been told by some very important people, "we don't pick music, music picks us," and it's true.  We are musicians because for us, it is as important as food, air, and water.  It's how we express ourselves and how we communicate with others.  It's our tool for bringing people together.  In music, we share an experience, tell a story, encourage imagination, memory, and empathy, bring hope, joy and comfort, and ultimately, through this shared experience, strengthen our sense of community.

So, don't be bound by the ledger lines.  Listen to that still small voice.  It has served you well for all these years, and I have every faith that you will continue to make decisions and follow a path that speaks to you and what you value the most.  Everyone knows the saying, "where your treasure is, there will your heart be also."  But as you look ahead to what comes next, maybe you should flip the script and remember: Where your heart is, there will your treasure be also. 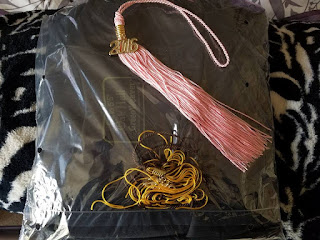 It had been so long, I forgot the URL.
I was surprised to discover I had changed it to a "dot net" address.
I'd like to think I remember doing that, but I really don't.

It had been so long, the domain name expired.
Just yesterday, but still.
I found the email where they asked me to renew it, but I hadn't even opened it.
It was buried, with everything else unread.

It's easier when kids are small.
When the days are filled with stories and adventures,
and it's fun to retell the darndest things that have been said,
that become both family legend and blogging fodder.
Still, time marches on, and rightly so.  Things aren't supposed to be the same forever.
But December 1, 2016 is a world away from September 21, 2003, when this all began.

I no longer mark the years by lost teeth or school dances,
and while (at least in my family) there are always darndest things being said,
they are much more adult in nature.  Some funny.  Some serious. Some devastatingly sad.
And as I sit today to write a post, I'm still very aware of one thing:
Just because you can, doesn't mean you should.
Maintaining a balance between public story telling and private life living
is something I take very seriously.

So here we are nearing the end of the year.
It hasn't been kind to a lot of people.
The world is louder than ever.  Angrier too.
I don't want to add to the noise, but I don't want to be silent.
And now, maybe more than ever (and maybe this is just for my sanity)
I have to remember and acknowledge and say out loud:
There are good things.
There are good people.

Thank you, Holidailies.
Even on the first day of December in the last month of 2016
when uncertainty seems to be the only thing I can count on,
You're there to remind me that my words don't need to be noise,
And a thoughtful voice still makes a sound that can be heard.
We've done this dance for many years, you and I,
and although I think it's fool's task to recreate the spirit of Blog-posts past, I'm OK with that.
Now isn't then.  It's not supposed to be.
I'm ready to accept the challenge of finding my today-voice and writing my today-stories.