When you were born, we never really called you an infant. Infants are small and weak and helpless. Even before you were born it seemed you were anything but helpless. You had your own plans and your own schedule. Once you finally showed up (three weeks late, thank you very much), you weren't big on being either small or weak. As a brand-spanking newborn, GramTuna remarked how awake and alert you were; taking the whole world in as if you were glad for the change in venue because dammit, you had things to do. Yes, you were an infant. But you were always so much more.

When you were a little older, we never really called you a toddler. Toddlers "toddle" (I guess), and that unsteadiness seemed somehow contrary to your personality. When you decided to walk, you just did it. There were no video cameras or waiting arms as you traveled from one excited adult to another. No, in fact, I clearly remember standing in the kitchen doing the dishes, and the next thing I knew, you had strolled in from the living room to see what I was doing. At the time it startled me, but as I look back, this has become typical behavior. You have never been one to do anything (and I mean ANYTHING) before you were darn good and ready to do it. But once you decided the time was right, there was no toddling, no learning curve. It was just BAM ... another skill accomplished. Yes, you were a toddler, but you were always so much more.

Time passed, and you continued to live life on your own terms. You were a pre-schooler, but never went to pre-school. You went to college school which celebrated you and all the gifts you had. In the frustrating world of daycare, college school became a godsend, and we watched you thrive, making friends with kids from all over the world, and going everywhere with your class. There was nothing "pre" about your education. You jumped in with both feet. Yes, you were a pre-schooler, but you were so much more.

No one's life is easy all the time. But you have always embraced life with an amazing sense of wonder and excitement. Even when the fairy princess face paint was washed off, your world was magical.

You love the opportunity to be on stage and live to perform. When you're singing or acting you're with your people, and it doesn't matter if your fellow actor is 7 years old or 70 years old (or Toonces the mechanical cat) -- you love them all. What's even better is that you don't do this for your own personal glory. When you haven't been able to be on stage, you are always sure that we go for your friends. That sense of support and caring for others is a rare and wonderful gift.

After being relatively skittish with animals, you embraced two little lost kittens and now you and Mila (in particular) are thick as thieves. You call yourself Mila's human, and everyone in this house is very clear who belongs to whom. Yes, you got the nice quiet one. I got the 5am meowling whiny baby. Thanks lots for that one.

Now that you're older, life has become a complicated juggling act. Your time is filled with friends, school, dance, dance and dance (ballet, tap and jazz), church, choir and oh yeah, that little thing we call the Grammy Award Winning MSU Children's Choir. One minute you're giggling about cute boys and the next you are performing a Pulitzer Prize Winning 20th century composition with the Detroit Symphony Orchestra.

You're leaving the age that some call tweens. I never liked that name. It means you're not little and you're not a teenager. But "not" is at the core of its definition, and believe you me, you've never been a not. One thing I have noticed over these past thirteen years: you are always so much more than any label. Maybe this is why I've been so hesitant to make the jump from TinyTuna to TeenTuna.

I'm sorry to tell you that the word teen carries a lot of negative connotations and can pretty much turn any parent into a quivering mass of fear and panic. Teens are moody. Teens are rude. Teens pretty much believe the world revolves around their precious behinds. Teens are needy and demanding yet would prefer it if you walked several paces behind them (and PLEASE DON'T TALK TO THEM) so you don't embarrass them.

But at the same time, Teens are wonderfully optimistic. Teens have an infectious love of life. Even when times are difficult, Teens are a real inspiration. Whereas adults tend to get stretched and pulled too thin until they snap, Teens have amazing resilience and snap back into shape like Silly Putty.

So now what? You have danced to your own song and defied every label for the past thirteen years, and knowing you, that isn't going to change anytime soon. At least I hope not. I love what you've done so far, and cannot wait to see what's next. Ultimately, it doesn't matter much what I call you here on these pages. A part of you will always be my TinyTuna; my wonderful little girl. But I must admit, your begging and pleading and the masterful stuffing of the ballot box on your behalf has won me over.

But no matter what anybody calls you, I do have one small request.
I ask that you always remember to be so much more. 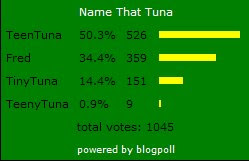 Posted by GreenTuna at 1:13 AM

What a beautiful entry, GT. Happy MomTuna day as you share it with your SoMuchMoreTEENTuna.

Our little fish are very similar, including the whining. I was most persuaded by the whining persuasive essays. NOT. But I suppose by sheer force of nature, she shall be TeenTuna and so it shall be.

Perhaps a harbinger of things to come: Wonder Boy last night asked to stay up late to watch a show, and instead of whining, he flattered and negotiated. I liked it. He's 11 and we're in for trouble, what?

That must be the kind of thing every child wishes his/her parent would some day say or write about him/her. It may be in our hearts, but it's so much more valuable when it's communicated. Thank you for a lovely start to my day!

Not that I'm jaded now that my little girl is almost 14, but may I propose: