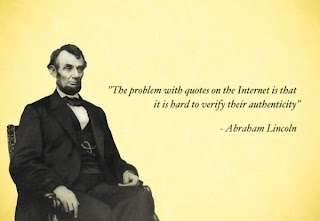 The Internet is a funny, funny place.  Part information clearinghouse, part social hub, part criminal breeding ground, part miraculous source of all that is good and part colossal time-waster, there is something in the tubes of the Internet for everybody.  In fact, when Churchill was talking about riddles wrapped in mysteries inside enigmas, was he truly referring to Russia?  Or the web?  Best to check Wikipedia.

Ah, Wikipedia.  Wikipedia is either an all-knowing oracle, or a main reason for the decline of the entire educational system in our country, depending on whether you are the provider or receiver of said research.  In truth it's a bit of both.  It's fine if you need to check a concrete, established fact (Lincoln was the president of which country?) but the problem is, you have to know if the information you seek is factual, research-based, or speculative.  Odds are, if you knew all of that, you probably already knew which country elected Lincoln to be their president.

Wikipedia, like so many other things, is a handy stop in the quest for basic drive-through information, and there is nothing wrong with it, provided that additional stops are made to verify your information.  And that's the problem.  We're too often a one-stop-shopper, and assume that what we read is factually accurate, no matter the source.  And it isn't just Wikipedia.  From print media to televised media to electronic media, everything should be questioned, but often is not.  We're increasingly becoming a society all too willing to grab a pitchfork first and ask questions later.  Or never.  I used to joke that "if it's on the Internet, it MUST be true."  Nowadays it's not a joke, and it's really, really not funny.

It's one thing to be skeptical of factoids, news items and political ramblings.  In fact, I think it's healthy to ask questions and do your own research.  But what about literature?  It's disheartening to invest time and emotion and interest (not to mention money) into works that are peddled as true stories, and end up, months if not years later, to be nothing more than a million little pieces of half-truths served with three cups of tea.  I simply don't understand the logic.  A well-written story is a well-written story.  Why would a classification of  fiction make it second-rate?

The problem, I would guess, lies with the four horsemen money, power, greed and notoriety.  It's a powerful draw to be a superlative, whether it is being first, the most controversial, the most sentimental or the most prolific.  Somewhere in that race we're losing the most precious gift of all: we're losing ourselves.  The more we stretch the truth and embellish the facts, the more we become like everyone else: jockeying for position and attention, truth be damned.  And that's really too bad, because an honest slice-of-life piece can be just as compelling as a work of fiction.  But anymore, no matter what I read, I'm going to smile and nod and doubt.

And then run to Wikipedia to see if it's true.

Posted by GreenTuna at 2:32 PM