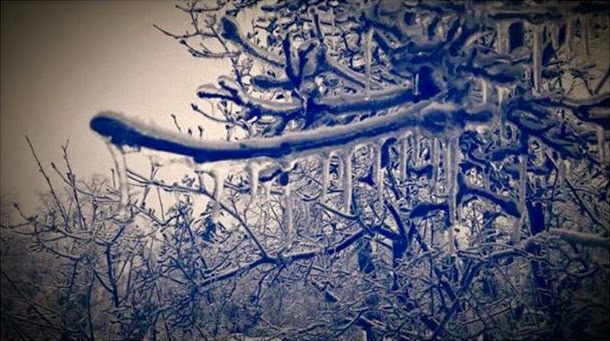 The one-year anniversary of day 1 was December 22nd.  It was a Sunday morning, a huge church music morning (Lessons and Carols) and we got an ENORMOUS (caps-lock, bold, leaned over) ice storm.  I woke up several times during the night thinking I was hearing things, and at about 4 am I was playing window monitor, trying to figure out where all the noise was coming from.

The answer was, it was coming from the ice.  Breaking things.  Mostly trees.  Which then broke other things.

I could see periodic flashes of blue in the sky just barely over the tops of trees.  If that would have been Northern Lights, I would have oohed and ahhhed for quite awhile, because it was strangely beautiful.  But I knew it wasn't The Northern Lights. It was transformers that were exploding.

The ice was causing branches to break and trees to fall which took out power lines and transformers, and consequently, the electricity.  At about 5 am we thought maybe we should open the garage and free the cars just in case.  It turned out to be one of the best decisions we made.  At 5:15 am we lost power.  And thus it began.  Day 1.

At first we were good humored about the entire situation.  From Facebook:

"Obligatory post about losing power.  Slight annoyance that across the street seems fine. Major win that we opened the garage 20 minutes earlier.  Wondering about church, knowing cleanliness will NOT be next to godliness.

All weather considered, church turned out to be a rather heart-warming event.  Despite the fact that an overwhelming percentage had lost power, the choir turned up en masse, and sang our traditional service of Advent and Christmas music.  It was as if nobody was going to miss this Sunday, no matter the weather.  We returned home hoping for the best but expecting the worst.  We got the worst.  But still, we kept a good attitude.  We'd rough it out for the night, wear lots of extra clothes to bed and be surprised in the morning with the roaring heat and blinding lights.  From Facebook that night:

"Power update.  Still none.  Looks like I'm going to make good use of my hoarders stash of candles."

That was another fortuitous event.  I had been forever working on cleaning the basement, and had run across of an obscene number of candles.  I had previously gathered them all together and stashed them in a plastic bin.  Thank Goodness.

Day 2 brought nothing.  No power.  No heat, and now the temperature had plummeted and it was COLD. Luckily (which one never says on a Monday), it was Monday so I headed to work (no use staying home and freezing) with every electronic device possible.  With two days until Christmas, all things considered, the mood was still optimistic and upbeat.


"Why yes, I do look like I got dressed in the dark, but the upside is it's warm and not dark at work and I'm busy charging a pile of electronics.  #LemonadeOutofLemons"


"I have achieved master ninja level in finding the only available electrical outlet in any given public establishment.  #ChargeItUp

This was starting to become a challenge. Working at the University meant work closed down at 5pm due to the holidays, so I couldn't stay late, and warm and lit.  We began to travel to different locations with a bag that was stocked with the essentials: a multi-plug power strip, a massive tangle of cords, and every electronic device necessary.  We'd find a restaurant, find an outlet and charge up phones and tablets so we could communicate with the world.  It was annoying, but at least we had contact.  And believe me, we weren't the only ones.  The power outage had crippled the city, not to mention much of the state. 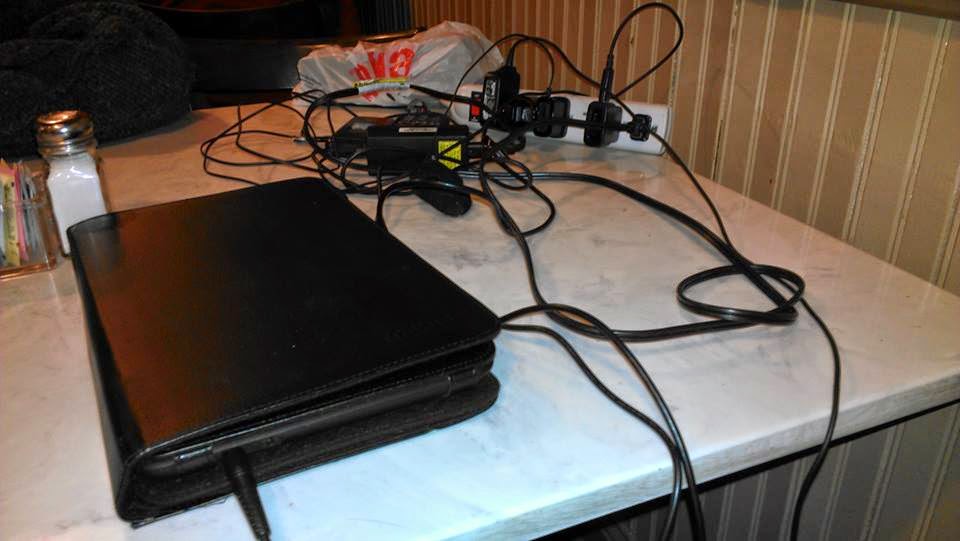 The only thing missing from this picture are all the phones,
which were in our cold, communication-starved hands.

Meanwhile at home, the cats were NOT amused.  They seemed resigned to the situation, assumed a cranky attitude and just hunkered down on the bed, glaring but not moving.  For once I was grateful that they were the hairiest beasts known to man, figuring that had to help because the house was really, really cold.  And dark.

As bad as the cold was, the darkness made it worse because by 5pm it was DARK. There was only so much my candlepalooza was able to do, and even with candlelight, what was there to do but look at each other being miserable?  So, we went to bed really early and just hoped for the best.

Day 3.  Christmas Eve.  No power.  This was no longer an adventure.


"That was the most realistic dream I've ever had. Dammit." #StillNoPower

"You may now call me 'travels with power strip.'"

"They always warn you about carbon monoxide poisoning, but never about the toxic fumes from competing scented candles."  #woozy  #whiffy

We gave up being hearty adventurer's on Christmas Eve night, and after late church, we headed to stay with family, and fell asleep, hoping for a Christmas miracle.

I went through a blackout like that once myself. You have my sympathies!

Aw sounds terrible. I'm glad you found humour in that situation. Outages suck. That map really got me chuckling though. Mixed with sympathy of course!

net worth
michael blakey net worth

Thank you very much for sharing the complete details about the novel and I am sure that there would be some other things that can make the novel more interesting.