Hail to the Chief 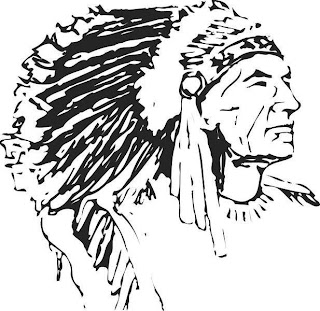 My high school and hometown are in an uproar.

The high school mascot and figurehead is a Chieftain, and this high school has been the "Chiefs" seemingly since time began.  It's not an unusual link -- Michigan has a rich Native American heritage, the town itself is named for the Indian Chief.  There is also a memorial rock dedicated to his memory.  The high school symbol of the chief is an Indian head in profile, wearing what seems to be full headdress regalia.  It isn't a satirical image, or a caricature.  I always felt it was a very dignified, proud and traditional image.

Now, in a very controversial decision, the school board has voted to eliminate all images of the chieftain.  The high school will still be known as the chiefs, but the name will be written rather than depicted in pictures.  Current high school students, alumni and people from the town are HOT over this decision, and not in a good way.

As usual, I'm of two minds of this whole thing.  I'm disappointed to lose what I always had considered a beautiful artistic rendering of our town's proud Native American heritage.  I never considered the image to be inappropriate or insensitive.  That being said, I'm NOT Native American, so would I really know?

A better way to handle this issue would have been to have a discussion in advance of the change.  If it's truly an insensitive image, explain why.  Let those who aren't of this lineage come to understand the pain it brings, or the stereotypes it portrays.  A little dialogue here would have gone a long, long way.

Instead the school board just announced it was effective immediately, and attempted to soften the blow by explaining this was to have been completed several years ago and seemed to have fallen by the wayside -- as if this was both an acceptable excuse and an ingenious way to lay the blame on The Ghost of School Boards Past.  This strategy did nothing to help their cause, and now everybody is mad at everybody else:  the students, the grads, the school, the school board, and, I might imagine, to some extent or another, those who might actually be pleased that they have chosen to phase out this image.  What could have been a teachable moment leading to greater understanding has turned into a big mess of hurt feelings and betrayal.

At the end of the day, it's important to remember that the school mascot is still The Chiefs.  We can be thankful that they didn't decide to rename the mascot entirely, because considering the fact that the "new" high school building (almost 20 years young) is built on swampland and is actually sinking, we just might have been the The Fighting Marsh Rats instead.

Here's to wondering what might be in store for The Vikings who live down the road....
Posted by GreenTuna at 9:51 PM