It had occurred to me several times over the years that 2012 was going to be a caps lock, leaned-over bold BIG BIG YEAR with two major events, namely, a senior year in High School and a 50th birthday.  I knew it would be a year of stories fueled by drama and filled with heartache, the thrill of victory, and the agony of defeat.  And that was just the birthday part. Sure enough, 2012 did not disappoint.  It was everything I expected and so much more.  This past year gave me enough writing material for an army of bloggers.  And life in 2012 wasn't just run-of-the-mill stories.  2012 was more like a Homeric epic, with Act I (High School) combining with Act II (College) to form some new layer of Dante's hell.  Needless to say, it was a crazy, busy time.

But there was no drama here.  Not on this page.  Here, to quote Elmer Fudd, it has been "vewwy vewwy quiet".  There has been no retelling of the epic sagas, no heartwarming tales, no humorous takes on the life of an 18 year old and no woeful half-century laments .  There hasn't even been a single bad joke, witty haiku, surreptitiously stolen Internet bauble or humorous picture.  Poor Abraham Lincoln has been sitting here since December 15, 2011 wondering if it was something he said.

What happened, and what I failed to factor into the whole notion of sharing the epic stories of 2012, was that I was very busy living those stories.  At the end of the day it wasn't possible to separate myself from life and examine what had been, what was now, or what might be next.  I didn't know the morals to the stories because the stories were ongoing, continuously unfolding one on top of the next.  It simply wasn't the time for meaningful commentary.  I didn't know what yet to say because I was too busy being a part of the story.

I was too busy being.

Today, as more and more people share more and more everything across more and more platforms, it seems odd and almost a little out of place to be quiet.  I'm okay with that.  I've missed the writing, and my poor page has seem pretty neglected and sad over the past year.  But I would have been sadder if I had neglected the most epic part of 2012.  Being There.  Being present. Living it.

And now, I have some stories to tell.
Thanks for waiting. 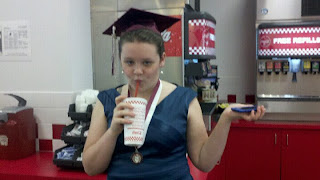 Posted by GreenTuna at 1:50 PM