I'm officially too tired to be witty or profound on my own, so tonight I'm going to highlight some favorite blog reads. Both of these are sort of "message in a bottle" blogs that are both fun and poignant inside with what we think and how we share it.

The first is the hysterical Postcards from Yo Momma which is a blog filled with IM conversations from the maternal unit.

Some favorites include the hilariously biting Mom, Dad and Facebook: A Dangerous Combination

There are always the wonderfully inane Post-Election Reward

Or the top vote getter of all time, Don't Passive-Aggressive-Smile-Face-ME. If that doesn't sum up mother-child relationships in one short paragraph, I don't know what does. 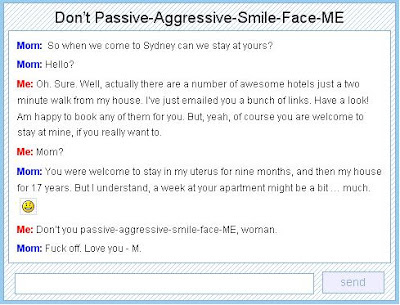 The other site as poignant as "Postcards" is funny. PostSecret is a Sunday-only blog that posts...secrets. According to the website, "PostSecret is an ongoing community art project where people mail in their secrets anonymously on one side of a postcard." The secrets are sometimes funny, sometimes sad, sometimes risque, sometimes poignant, sometimes celebratory, sometimes defiant and sometimes cries for help. Secrets from the PostSecret site have prompted the publication of four books, as well as national art exhibits and lectures all over the country.

You might wonder why anyone would share their secret with the world. I think the answer is, because everyone needs a sounding board, a wailing wall, a strong shoulder or a sympathetic ear. As you read through the site, you might be embarassed at some and think others are silly or strange. But it's very comforting when you hit on someone else's secret and your gut reaction is, "I thought I was the only one who felt this way." It makes the world a little smaller, and a lot more sympathetic.