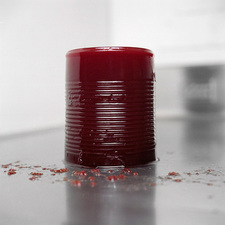 Tradition is what you make of it.
We started the day somewhat traditionally -- watching a bit of the Macy's Thanksgiving Day Parade.  Two thumbs way, way up for the Tim Burton balloon and its wonderful backstory.  Two thumbs down for corporate mascot balloons and some extremely poor attempts at lip-synching. 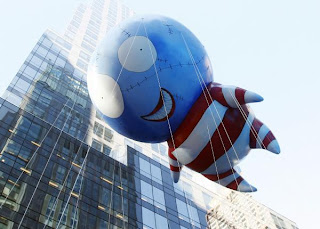 Our day continued in a decidedly non-traditional manner.  We went in search of the face.  And we found it. Technically we found them.  And for the record, let me say that I'm so very happy that the face is on a billboard and not on a wanted poster.  Once we found them, pictures were in order. 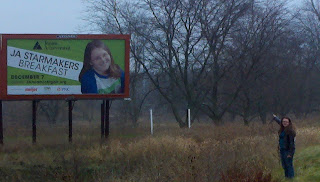 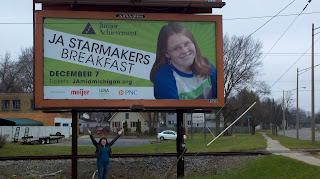 Then it was home and time for cooking, cleaning, practice, and homework.  The traditional portion of the afternoon was covered by the Detroit Lions losing in spectacular fashion to the Green Bay Packers.  Dinner was delivered first and eaten second, which seemed to be very appropriate.  When we got home it was anything but turkey and stuffing.  Instead it was leek soup, lamb shanks, spinach noodles, fresh green beans (CASSEROLE-FREE) and an apple-cranberry pie.  The teenager declared it was the best non-turkey meal EVER and frankly, I agreed.  We'll do the whole turkey-ma-gig on Saturday, but today it was a little bit of familiar mixed in with a whole lot of you did WHAT?  In other words, it was tradition.  Tuna-style.