Six years ago I was exactly where I am today: surrounding myself with music and teaching eager college students to sing. I didn't know the world had spun out of control until almost 11:30 am, when a student came into my studio with a dazed expression. My first thought was, "ugh. Boy troubles" and I started to mentally replace my diva crown with a psychologist booth that said, "The Doctor is In." She gave me an incredulous "don't you KNOW?" and then filled me in on what details she had. I spent the rest of the day teaching in a haze as I tried to contact family members who worked in Washington, DC and lived less than a mile from the Pentagon.

Two years ago I was in New York City, surrounding myself with music as TinyTuna was singing in Carnegie Hall with the children's choir. GramTuna and I drove up and stayed in a hotel that was across the street from the huge crater known as Ground Zero. I thought I would feel more than I did as I stared at this now cleaned out construction site. But other landmarks haunted me more, like historic St. Paul's Chapel up the next block and a large building also on Ground Zero that was entirely enclosed in a black shroud due to toxic mold and dust. 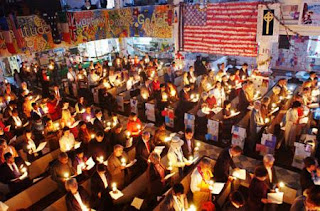 St. Paul's Chapel was a symbol of life. This was the tiny church that suffered no damage from the collapse of the towers. This was the tiny church that became home for so many who worked 12-hour shifts for months and months after the attack; sifting through wreckage and looking for traces of anything that might bring comfort to surviving family members and friends. Inside it was filled with teddy bears and artwork that spoke of the eternal courage and hope of all the rescue and recovery workers. 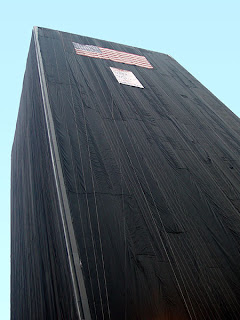 But the enshrouded Banker's Trust Building (also known as the Deutsche Bank Building) was an eerie reminder of death. Because of the mold and dust no company was willing to tear it down, so there it stood, mute. It was a haunting grim reminder of horrors past. 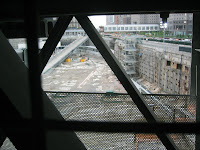 Ground Zero was neither life nor death. It was now just a cleaned out hole with a few random construction vehicles. If you didn't know better, it looked like any other construction site. Now sanitized from its painful past, it just stood quietly, betraying its awful past, awaiting its next foundation.

Six years ago we were a different country. There were troubles, to be sure, but as a nation we were blinded in our innnocence to the possibility of hatred and violence on American soil.

How things changed after that day. Instead of being blinded by innocence, we were blinded by rage and a craving for world power and domination. We plunged recklessly into war. Blinded by grief, we succumbed to a life of fear and watched our many human rights stripped away from us one after another, like a bandage on a wound not yet healed.

2190 days later, perhaps the greater tragedy is how things have stayed the same. There are symbols of death. Over 3000 enshrouded reminders have returned to be buried in American soil. There aren't many pictures, because that would show weakness and project a negative image of the war machine. But make no mistake, they are there. Just ask the parents, husbands, wives, and children. No community has been left untouched by this unshakably sad shroud of loss.

There are symbols of life. The American public has started to wake up, speak up and question the rhetoric. Finally people are recognizing that those who govern BY fear are doing so BECAUSE of fear. America might have lost some of its blind innocence, but in its place there is an increasing sense of the true meaning of the word leader, and it comes from a source of strength and confidence, not fear and intimidation of its people.

And then there is that place that is neither life nor death. A place with a few random security vehicles, but so sanitized and removed from both life AND death, if you didn't know better, it would look like just another tourist stop in our nations capitol. Just like six years ago. Just like today. And probably, just like tomorrow.

Maybe one day it will be different. Maybe as a people we will learn. Maybe we will continue to find our hearts and our voices and become courageous and strong enough to be symbols of life unwilling to be ruled by fear. Maybe we will be brave enough to acknowledge and honor the shrouds of death. And maybe, just maybe, that little tourist stop at 1600 Pennsylvania Avenue will own up to its awful past and admit it isn't so sanitary after all. 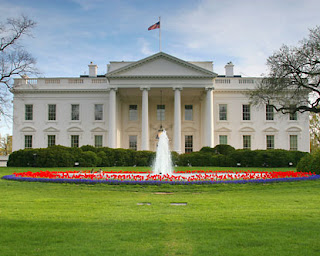 In fact, it's a downright mess.
Posted by GreenTuna at 5:11 PM