When I teach I make it a point to be sure that my students know what every single direction means within a song.  Printed instructions in other languages are quite common, and students quickly learn terms like Da Capo (Musically speaking "from the beginning") and Fine (musically speaking, "the end").  Other instructions include musical notation.  One of the first a student might run across often looks something like this:

When asked what it is and what it means, I get about 50% correct answers.  Sometimes they'll know the answer but not know the exact words, and then I get the equivalent of a collegiate interpretive dance as they explain it to me using every word in their vocabulary, except the five most critical.  What it is, is a metronomic marking, which leads me to the next question.  What is a metronome? 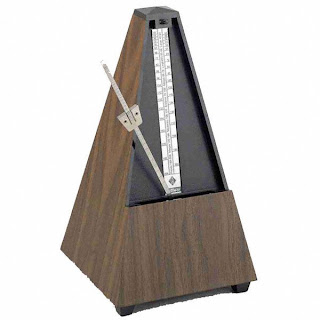 A traditional metronome is wooden with a long weighted stick.  You move the weight up and down the so it matches the number on the page, and it will give you the beat.  Nowadays, metronomes come in every conceivable shape and size . Many are electronic and there are even webpages that contain a virtual metronome.  This is particularly handy when your traditional metronome (read: OLD) sounds more like the uneven gait of an old horse (CLOP ....clipCLOP .... clipCLOP) than an even click-click-click.

For those that are familiar with what a metronome looks like, we move on to question #3: what does it do?  Here is where students tend to stumble.  They know what it does, or at least how to correctly operate one . But ask them precisely what a metronome does and it's not uncommon for them to stumble.

What it does (for those of you who want to answer correctly should some deranged music teacher stop you in the street and start to quiz you on random bits of musical knowledge) is keep time.  A metronome is in fact, a kind of clock, but it only shows the continual passage of time without a start or a finish.  It doesn't divide time into repeated segments, like minutes or hours or days.  It's like having a second hand of a watch, that you can adjust.  Set a metronome to 60, and you have exactly that -- a second hand.  Set it to a higher number, and well, you'd always be early to supper.

This is the time of year that pundits and bloggers and essayists and all sorts of social-literary-scientific-and so on-measurers like to talk about time.  I'm already knee-deep in "best of" and "worst of" lists for 2009.  What surprised me, though was reading the same sort of lists that encompassed the decade.    To talk about time flying is ridiculously cliché, but the more I think about it, the more I don't know how to describe it.

Ten years doesn't sound like that much when you say it, but when you start laying things out, it becomes unreal.  The country saw and survived eight years of George W. Bush, a heavily contested Presidential election, the election of the First African-American President and the appointment of a female Latina to the United States Supreme Court.  Rights have been bestowed and then yanked away like a tablecloth under a completely set table.  We suffered attacks on 9/11, were scared to near panic by the DC Sniper and mourned the loss of life in the Virginia Tech Massacre, the Amish School Shooting Spree and so many other tragedies.  Every single season of American Idol happened during this past decade, as has Amazing Race, Big Brother, Iron Chef American and Lost.

There are countless ways to measure the last ten years, and I have found myself (several times) feeling both amazed and stunned that something-or-other happened when it seems like it happened either last week, or forever ago.  There is no in-between.


For me, though, the easiest way to measure and the most astonishing of them all is to recognize that in the past decade TeenTuna went from first grade to tenth grade.  That fact alone puts everything into focus, and then the list of events, accomplishments, disappointments and losses becomes colossal and yet understandable.  If I saw a list of everything that happened in my life and in the life of my family and friends over the past ten years, there would be a lot of head shaking and general disbelief.  But I think there would also be waves of contentment, wistfulness, sadness, giggles, joy and pride.

But despite the length of any given decade-long remembrance, I can say that, regardless of content, my overwhelming feeling would be one of thanks.  Thanks for all the joy.  Thanks for all the stories and pictures and smiles and laughter and tears.  Thanks for the opportunities and triumphs.  Thanks even for the failures, because I can look back over the last ten years and say because of the all the good stuff and regardless of all the bad stuff, I'm still here.  Some are no longer here, but I like to think that I carry their stories with me, and those experiences make my journey so much better.  As for the rest of us who continue to mark time, whether it's good, bad, or in-between, it's time to wind up that metronome once again.

Time truly is a mystery! Wasn't it Einstein who said time can be bent?
I think the limits are in our own thinking and one day, if the race survives long enough, we will better understand the limitlessness of time.
Or--maybe not! :)