On the day before Thanksgiving, many people travel to whatever place they call home. The feeling is warm and comfortable, and the houses are filled with the scent of spices, apples and pumpkin pie.  It's nostalgic, Norman Rockwell-eve.  Tomorrow will be turkey and stuffing, cranberries, sweet potatoes and all the fixings, whatever they may be.  It will be too much food, too much family, and a little bit of football, parades and napping to fill in the cracks.

My today went something like this:  Work at 7am.  Try not to slip into a deep and fatal coma.  At 11:30 we dash home and pick up TeenTuna, who is going to join us for lunch.  But first, we have to go on an expedition.  We are seeking the child.  Alas, there isn't a star to be found at 11:45am in Michigan, so celestial navigation is out of the question.  Finally, with angels singing (and car horns honking) we approach with a certain reverence the one whom we seek: 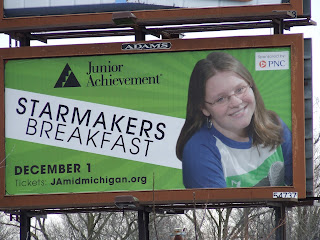 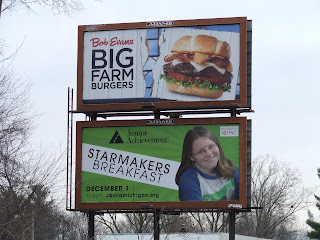 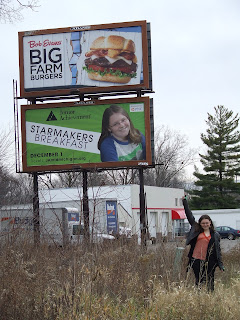 So we make her stand in the middle of the weeds and point at the sign while we stand in the middle of the road... the busy road... at noon... and take pictures.  Because we can.  And how many times is your kid going to be on a billboard?  Granted, with this one?  It's hard to say.  But as long as her picture isn't on a milk carton or the FBI's Most-Wanted List, we're okay.
After billboard hunting, we continued to hamburger devouring (not at Bob Evans, sorry Bob) and I returned to work to resume holding down the floor (steady), testing the quality of the air (poor), and practicing silent meditation (sleepy).  Then we had to dash away dash away dash away all to her voice lesson, where I dumped her and ran to an ATM so I wouldn't have to pay her teacher with a fistful of George Washingtons.  Post lesson we raced home and ran out the door yet again ten minutes later.  Off to church for the usual day before Thanksgiving dinner and service.  I sat next to a handsome young man who is in his freshman year at college.  Instead of making him recite his favorite things about college and Chicago, I looked at him and said, "OK..... class that makes you want to poke your eyes out with a sharp stick?"  Because really, whatever the answer is, it's going to be ten times better than "what do you like the best about (fill in the blank)?"
We didn't stay for church, but ran two quick errands and finally made it home.  It wasn't warm (the heat was off), it wasn't spicy (although later TeenTuna warmed up leftover spaghetti), and there isn't a pumpkin pie to be found.  Instead, we made a batch of spicy warm queso dip, and flipped channels between a Stephen Sondheim birthday celebration on PBS, and South Park's musical version of "The MiracleWorker".
Because really now....who can choose?
Tomorrow will be another non-traditional day.  The turkey is getting a 48 hour reprieve, and we're celebrating with lamb.  There might be a little parade watching (especially if it's a high-wind day... that's when it gets FUN), a little warm cider quaffing, a little laundry doing, and a lot of homework completing.  About the only thing traditional in our house in this non-traditional day is that there will be NO MINCE PIE.
And for that, I will be truly thankful.