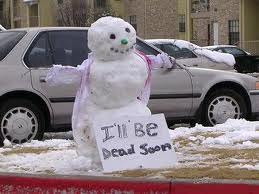 I know exactly where my snow shovel is - still in the store.