I want to kiss Herman Munster.

TinyTuna has recently discovered The Munsters on some cable rerun channel, and loves it. Even better (and more miraculous) is that she is -- on her own accord -- opting out of whatever nonsense is playing on the Disney Channel so she can party down with Herman, Lily, Eddy, Marilyn and Grandpa.

I've never been particularly good at holding back my opinion of the junk they show on The Disney Channel. The kids are loud and smart-alecky. I'm sure some marketing person somewhere thinks this kind of dialogue is nothing more than smart, saucy jabs of precocious and highly intelligent teenagers. But it's not. What it is is just plain rude, and if I ever dared speak to any adult that way, well, let me just say, I'd never be talking that way, because if I did, that would be the last time. To make matters worse, on all these shows every zinger is accompanied by an obnoxious canned guffaw track and enough facial mugging to make a ham weep in envy. Honestly, if you need all that stuff, you know it was never that funny to begin with. It's the equivalent of having someone stand behind you with a Louisville Slugger and beating you senseless. DID YOU GET IT? DID YOU GET IT? DID YOU GET IT?

So I do my best to limit how much Disney dreck wafts though my living room, and I pray for sweet relief. Who would have ever guessed it would have come in the form of Frankenstein, The Bride of Frankenstein, Dracula, a Werewolf, and poor, poor (ugly) Marilyn.

"I just LOVE The Munsters," TinyTuna gushed. "They're just so HYSTERICAL!"

"It was a fun show. I liked it a lot when I was your age," I said, And then I quietly put down my Louisville Slugger and said a prayer of thanks, because she got it. All by herself. 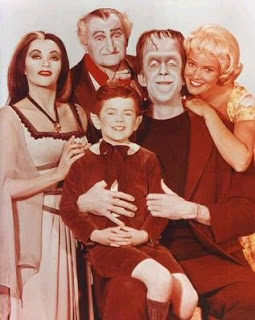