When I opened my weekly email full of new cross stitch patterns, I knew I had hit the jackpot for the second week running.  Although all commercial outlets are now in full-on Christmas mode, the crafting world is still unwilling to totally turn it's back on Halloween and all things spooooky.  I think the theme for this week's cadre of clunkers is either  Swing and a Miss (which is baseball) or Right Place, Wrong Time (which is a Dr. John Song).  Keeping that in mind, I'd like to share with you a few outstanding goodies. 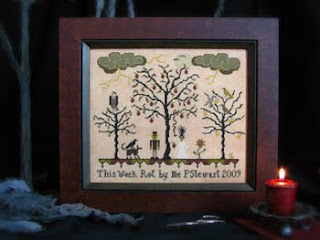 They call this delightful piece The Garden of Eerie.  At the bottom of the picture (in fairly illegible script) it says "This Work Rot by...."  Now, I know God created all things, including dead trees, lightning, sickly green clouds and the like, but who thinks a riff on the creation story that includes Frankenstein, Medusa and one cheerful yet horribly out of place sunflower is a good idea?  Also, any points that might have been scored for punnery (rot) are immediately disqualified by the fact that the pun is based on a word 75% of the population is unfamiliar with and 99% of the population NEVER USES in conversation.  Or cross-stitch.

2.  Be wary of anything involving a moose. 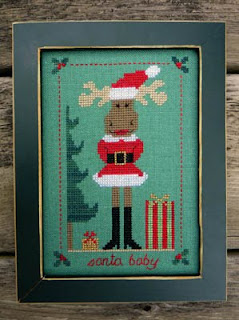 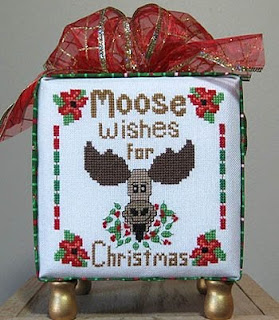 Now, here's a pair for you (that's what HE said! baDUMPBUMP!!).  Oftentimes in crafting circles someone, some place or something will be glommed onto as the next great obsession.  Lately, in the world of cross-stitching, it has been the moose.  Why?  I don't know.  I guess snowmen have been done to death.  What I don't see here, is the reason for the moose.  Usually with animal novelty pictures they will include some sort of pun that is meant to distract you from how incredibly stupid the picture is.  You know, something along the lines of Merry ChristMOOSE or MOOSE be Santa.  But in both of these cases, we aren't even given the benefit of a bad joke.  All we have is an extremely disturbing picture of a moose in a risque "Santa's Helper" costume (complete with thigh-high black streetwalker boots), and on the bottom, well, I don't even know.  The words don't even make sense.  They aren't punny.  They certainly aren't funny.  They aren't logical.  It's just a sentence with the word moose thrown in.  And as for the actual moose part of the picture, all I can say is the absence of eyeballs makes it a perfect candidate to go inhabit the creepy garden of Eden above.

3.  Know the very BIG difference between the words novelty and novel

I can't imagine anyone in their right (or wrong) mind wanting to sit down and cross stitch the entire book of Exodus.  Seriously, forty years later, it still probably wasn't finished.  The best BEST thing about this picture is the title:  Holy Moses!  I can't wait to see the companion piece:  the entire new testament cross-stitched on a bell-pull, entitled Jesus CHRIST!

4. Be sure to always, ALWAYS read between the lines 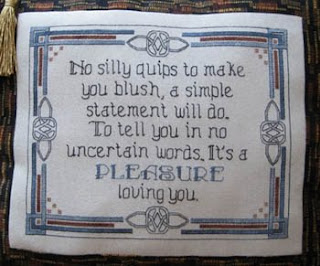 PRO:  A lovely SHORT sentiment, with no traces of moose or Medusa.
CON:  Wide-ranged marketability for a prostitute's customer service motto is limited at best.