This summer I discovered the cult television classic Mystery Science Theater 3000 (MST3K).  It doesn't matter that I was about twenty years late to the party.  I stumbled on it on the Internet (a breeding ground for just such a thing), and instantly fell into hysterical love.  For those of you who were die-hard fans from the beginning, you are justified in the rolling of eyes and wondering what took me so long.  For those of you who many not be familiar with this beast, let me introduce you. 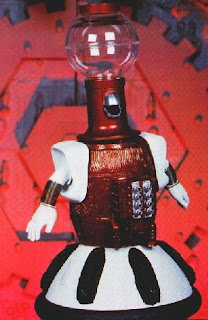 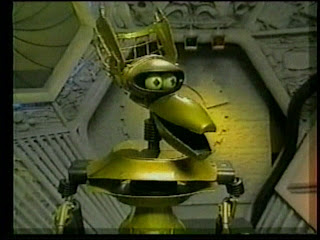 The premise is a human and his two robot pals (Tom Servo, whose head is a gumball machine, and, Crow T. Robot, whose mouth is a bowling pin sawed in half) are tortured weekly by being forced to watch a bad movie.  Needless to say, over the years there were lots of Godzilla movies, Hercules movies, Spiders, Leeches, Werewolves and other forms of cinematic horrors.  There were Creeping terrors and She Creatures.  Even Santa Claus and Jack Frost made an appearance or two.  What made it so good was the constant acerbic banter that went on DURING the movie.  Some of it was juvenile, some of it was slapstick, some of it was obvious, some of it was unfunny, and much of it was downright intellectual.  Badness never had it so good.

The first movie I saw was The She Creature, which is famous for a long-standing retort NOW SLEEP during every hypnosis scene.


Having discovered something hysterical, the first thing I did was show TeenTuna several clips.  I figured she would like it (LOVED IT) and she would get most of the jokes.  As I expected, it was right up her alley.  After all, in the movie The Screaming Skull, when the soundtrack becomes extra "scary" with a lone Soprano Ahhhh-ing all over the place, how many people are going to understand the crack, "...Kiri Te Kanawa is drunk again" and think it's funny?

One of our favorites was a dubbed-over German version of Hamlet that was heavy on the ham.  We were thrilled to hear the return of "to SLEEEEEEP" in his soliloquy, and one of TeenTuna's favorite lines is where Crow T. Robot utters a very embarrassed, "he said bare bodkin!" and giggles like a sixth grader.

The show was extremely witty when it came to musical references.  There were riffs about Stravinsky and Rimsky Korsakov, and at the end of one stellar movie (Werewolf) they sang over the entire closing credits in a kind of tag-team version of popular music.  TUSK!

Even big-budget action-adventure musicals didn't escape the love of MST3K.  My favorite?
Uh...if you find a melody, Sinbad....hop on.
Everybody ... just the goldfish now!

This summer, in a stroke of fabulous coincidence, the MST3K crew did a live riff of the cult classic Plan Nine from Outer Space.  This performance was broadcast live in several hundred movie theaters throughout the country.  Of course, TeenTuna and I were besides ourselves with ridiculous excitement.  And the film didn't disappoint, either.  Although the two of us definitely looked like we didn't belong, it was a great evening.  TeenTuna in particular was ROLLING in the aisle.

Mystery Science Theater 3000.  Check it out.

Heh...if you have not watched MST3k's "Mitchell," you MUST watch "Mitchell!"

Joe Don Baker will never be the same.