Of Lights and Bushels

Working on and living in close proximity to a lage college campus means I have come to accept certain behaviors, activities and truisms as things that "come with the territory."  For example, Thursday night has now become opening night for the weekend drinking set, and it's best to stay away from downtown.  I also know that life is insane on football Saturdays.  I have learned by one too many close calls that no matter the mode of transportation, students never watch where they are going or whom they are about to run into.  I know that one should never expect a campus bus to stop or slow down when you're in the crosswalk.  And lastly, I have grudgingly accepted the fact that squirrels are the equivalent of the animal mafia, so it's best to be prepared.

Today as I took my mid-morning walk, I saw a couple of people stationed near the bridge with boxes of stuff.  This wasn't surprising because this particular location is well-known as the place where all sorts of people stand and share their opinion on whatever their heart desires.  This may happen by talking, arguing or screaming, and with or without a soapbox.  It's the spot for preachers, protesters, or students passing out literature in support of their cause du jour.  Because these people had positioned themselves in the middle of the sidewalk, and because there wasn't anybody else on the sidewalk except GramTuna and myself, I knew contact was inevitable. 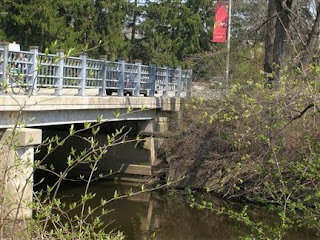 The woman approached me and tried to give me a book.  And I'm not talking Gideon pocket New Testament sized, I'm talking BOOK.  Usually a book of this size would be the work of Scientology, but not today.  It was a full-sized paperback copy of The Origin of the Species by Charles Darwin.  While I was declining my copy, my mind was racing, trying to figure out why they were passing out Darwin books, and why, somehow it sounded vaguely familiar.  And then I remembered.

"Is this the edition where a bunch of stuff was added in?" I asked.  I knew I wasn't being specific, but I wasn't trying to engage in conversation.  I was simply trying connect the dots in my sieve-like brain.  The woman shot a glance at the man she was with and then said, "Yes it is."

Ahhh... and then it all made sense.

After dashing out for lunch and buffering another hit-and-run booking (and having to find a terribly creative way to return to work without getting accosted a third time) I went back to my desk at work and did some searching to re-familiarize myself with the story behind this story.  It turns out that November 2009 marks the 150th anniversary of the publication of this book.  A man named Ray Comfort discovered the book was in public domain and decided to have it reprinted and widely distributed for free on college campuses all over the country.  That's the story.  Or, that is a part of the story.  You know there is more.

It so happens that Ray Comfort, along with Kirk Cameron (of the old TV sitcom "Growing Pains" fame) have launched a ministry called The Way of the Master, which makes many claims, including the fact that the earth is less than 10,000 years old, and the banana is definitive proof that God exists.  I'm not quite sure if this also means that banana splits are definitive proof that schisms occur within the church, but I suppose we will have to leave that theological discussion for another time. 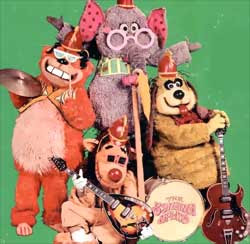 Not this one.
So, to put it bluntly, Ray Comfort and his ministry are creationists who decided to reprint hundreds of thousands of Darwin's book on evolution and distribute them for free.  But even this can't be the entire story, can it?  Of course not.  Included in this book is a 50-page introduction "written" by Comfort.  What is not included in this book are several chapters of the original book.

Before I go on, let me say a few things in the interest of full disclosure.  Do I have an opinion on the issue of evolution vs. creationism?  Of course I do.  But really, this honestly has nothing whatsoever to do with what I do or do not believe.  Nor do I see this as a battle between Darwin and Ray Comfort.  I think Darwin is pretty comfortable with what he wrote, and besides that, between the fact that Comfort has no scientific background and Darwin's dead, it wouldn't be much of a debate.

This is my real issue.  It's bad enough that chapters were cut out of the original book.  It's worse that a large percentage of the introduction penned by Comfort has been shown to be plagiarized from several sources.  Yes, there is a section on attributions, but the wholesale lifting of chunks of texts really do require that pesky set of quotes.  Comfort also uses the introduction to lambaste Darwin and to preach creationism.  But the biggest problem I have with this entire affair is what it doesn't say.  It doesn't tell you it includes an introduction by Comfort.  It doesn't tell you that the original book has been chopped up and entire chapters eliminated to serve Comfort's needs.  It doesn't tell you any of that. It simply says it is The Origin of  the Species by Charles Darwin.

Here's what I don't understand.  If Mr. Comfort feels so strongly about his beliefs (which I am sure he does), and if Mr. Comfort believes he is bringing the truth that God is the one and only Almighty Creator, then why is he hiding it?  Why not publish a book about his beliefs of creationism and put his name on the cover?  Why does he hide behind Darwin's work in an attempt to sneak in his own?

One of Mr. Comfort's arguments is that Creationism has not been allowed to be taught in schools, so kids are brainwashed (his words).  He wanted to present Darwin's work with his own thoughts so that college kids around the country could make up their own minds.  I might be able to accept (at least intellectually) that argument, if Mr. Comfort didn't also feel the need to chop up Darwin's original work in the process.  It's impossible to do an accurate compare and contrast if you aren't given the entire body of work to study.

And when it comes down to it, I have to wonder what is Mr. Comfort afraid of?  With the less-than-forthcoming inclusion of his introduction, and with the unacknowledged abridgment of Darwin's work, did he think God wasn't strong enough to stand on merits alone?  I can't imagine feeling the need to award a handicap to The Almighty.  We're taught to let our light shine and not to hide it under a bushel.  It seems Mr. Comfort prefers to hide his light in the bushel until he thinks nobody is looking, and then dash out, set everything on fire, and hide once again.

Some have suggested getting as many copies of this free book as possible, ripping out the introduction, and then donating the book to other sources.  I rejected that idea since there are still chunks of the original book that are missing.  Better instead to buy a real copy of the book -- whole and complete.  And if you like (or if you prefer), buy a book on creationism too.  Compare each on their merits and your beliefs.  But compare each source in its entirety and without vitriolic writings from outside sources.  Whether your beliefs fall under the umbrella of creationism or evolution or somewhere in between (or if you can't find your umbrella yet), don't apologize. But if you're not willing to speak your beliefs, if you are not willing to put your name to your argument you work so hard to make, if you feel the only way to convince others is by obscuring and skewing the opposing viewpoint by deleting huge chunks to serve your needs, then by all means, enjoy your beliefs and opinions on your own time.  But please, take your light and stuff it right back under the bushel where it belongs.